A downloadable game for Windows

A virtual reality headset is needed (for now).

Don't panic when the temple's doors slam behind you. A slow and resourceful approach may yield the treasures you seek.

In Temporal, a VR puzzle game made for Houdini Game Jam 2020, you will explore a mysterious temple, and attempt to overcome its challenges as you move deeper towards the temple's secrets.

Can be launched with SteamVR or Oculus (Windows Mixed Reality may also work). A first-person emulation is available when a headset is not found, but this control scheme hasn't been finished. Let us know if you had issues with your VR hardware.

Please, note that only trackpad/stick locomotion is currently available. Step away from the game if you're feeling motion sick, and leave us some feedback about your experience and preferred movement system.

How was Houdini used in your game's development?
We used Houdini to make our rocks, pillars, and temple entrance by adding edge damage to simple blocked out versions, and then placed the rocks using Houdini. We generated our stone walls and created a procedural stairs model to create stairs of any size in the level.

List any content that was created before the jam that was included in the final submission.
Arrow model
Crackling fire sound
Water material
Tree model
Dungeon ambience sound by Sword Coast Soundscapes
Sounds from https://freesound.org/ as the basis for a few of the sound effects

This is the first game jam submission from Grumbly Bear Games, a small team of friends, both professionals and hobbyists. Let us know what you think, and if you'd like to see more from us! 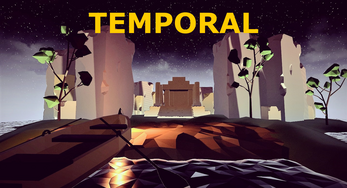